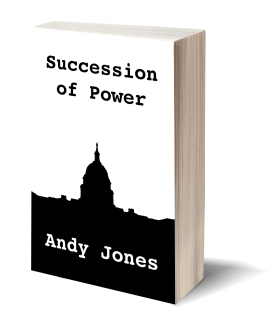 The biggest new phrases in our lexicon are things like ‘fake news’ and ‘alternative facts’. It’s easy to say that old adage “you’re entitled to your own opinions but not your own facts”, but it’s a perspective currently lost in the world of news and politics.

Many say – and understandably – that we need to grasp facts now more than ever before. They matter more than they have ever done. Now is not a time of escapism, of hiding from reality by delving into a fictitious world.

I still can’t quite figure out why the book I wrote last year – Succession of Power – is selling so well. I’m sorry, that sounds like a very arrogant thing to say. I hope you understand that I’m just genuinely curious as to why a book with easily the lowest-key launch of anything I’ve ever written has done such good “business”.

A friend who read it said that she enjoyed that it features a woman president. Someone who was strong enough to stand up for herself when the forces of darkness rise over her. She said she felt that this was a reference to Hillary Clinton – the president that “should have been” (in her eyes) – taking control when all around is out of control.

I certainly don’t think the character Mary Rosalind is the same as Hillary Clinton. It’s pretty clear that Clinton wanted the presidency for most of her life, and spent all of her time trying to achieve that goal. It’s a perfectly respectable aim, but it was never the goal of Rosalind. Mary was quite happy in the position she was given, just a little frustrated that her brilliant achievements weren’t acknowledged.

But I see what my friend means. A lot of people look at the big political decisions of the past year, and are depressed. I’m personally not depressed about the politics of 2016 (or at least, not any more than any other year), and I don’t think that’s just my natural optimistic comportment. There’s a lot of things to be objectively happy about if you’re lucky enough to live in the West today. Arguably we’ve never had it better. Who cares who resides in the White House? And when it’s someone awful, then let’s take the positives out of that: it means more people are concentrating on the nuances of the Constitution than they’ve done before. That’s actually quite refreshing, if you’re more libertarian-minded. Welcome back to the fold, anti-war, anti-government overreach protestors. Where have you been for the last eight years?

And here’s the funny thing about writing fiction. Though the stories can be larger than life, they only really resonate when they speak a truth. When they tell us something about human nature.

That’s all Succession of Power has tried to do. In the middle of a crisis, a president – and a small band of allies – do all they can to stand strong for the moral principles of a republic, when everyone around is losing their heads. It’s about how not doing something is often more noble and brave than doing something.

But heck, if you’re just looking for a story where there’s a woman president who knows what the hell she’s doing, despite being surrounded by stupid, solipsistic men, then I hope you enjoy the book. And it’s available for less than a few bucks on Amazon right now.