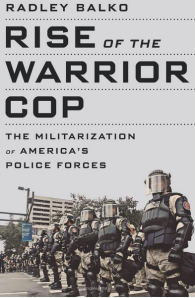 The awful scenes this month in Ferguson are a chilling reminder of warnings in Radley Balko’s “Rise of the Warrior Cop: The Militarization of America’s Police Forces.” (also available on amazon.co.uk)

Yeah, I know I’m a stuck record, but once again, libertarians called this long before anyone else. The inherent dangers of the post-9/11 security-state measures under Bush and Obama (no real distinctions between them), have been laid out more clearly by libertarians than any other group. And classical liberal Balko places it at our feet in the most straightforward way you can imagine.

The Federal orders, made in the last 7-8 years that allowed surplus military arms to be handed out to police officers throughout the US was brought about by the shock of 9/11. But sadly there were no specific rules to how those arms could be used. And how many al-Qaeda sleeper cells do we think are hiding out in Missouri, anyway?

So these powers – that made the scenes in Ferguson look like a level on Call of Duty – led to the problems we’ve see this month. Let’s think about it in plain step-by-step points:

Put it like that, and something seems very wrong doesn’t it?