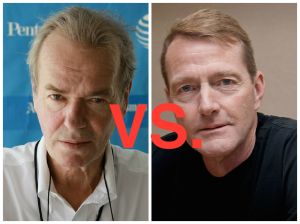 It’s a battle that’s raged for decades. In fact, it’s just one of the variations of criticisms of popular art that I’ve written about before.

Literary fiction has always been seen as the ‘posher’ more sophisticated, more grown-up version of fiction. It looks down its nose at the contemporary popular writers, be it Lee Child, Dan Brown or whoever.

I get the feeling that Martin Amis (pictured) often expresses a distain for this branch of popular fiction. His ‘war on clichés” (surely a cliché in it’s own right? I guess that’s his point) seem to push this feeling.

I love so-called ‘literary fiction’. But I love contemporary popular fiction from the likes of Lee Child (also pictured) too. Why do we have to choose? Child has been an outspoken critic of the literary end of the business, holding no punches back when he says that the average popular fiction writer could “churn out” a literary fiction book with ease, but the other way around could never happen. I bet he’d do a very good literary novel to be honest. But he’s one of those annoyingly brilliant writers who makes his whole craft look effortless.

The thing is, as much as I like the Salman Rushdie’s and Julian Barnes’ of this writing world, I can’t help feeling that if you look down your nose at “popular commercial fiction”, then aren’t you saying it’s because you prefer “less popular, less commercially successful fiction”? Surely that’s the antonym of what so many of them are against. As Lee Child himself colourfully puts it: “People steal more copies of my books than they buy of the others.”

The fact is that money talks. More people do buy copies of James Patterson than Martin Amis, however a ‘literary-type’ might dislike that. And they buy so many, that publishers are able to take a risk at more artistically creative work. Even if it doesn’t sell anyway near as much. Simply stated, the popular stuff subsidises the unpopular stuff.

I like the diversity of literature that’s around at the moment. It’s a glorious time. I hope Martin Amis forgives the cliché, but I wish we could all just, you know, get along.