It’s simple, it’s not that the US has a left-wing administration that’s increasing “investment” and the UK has a right-wing administration that’s imposing “savage cuts”. Okay, Obama has increased spending (and things would have gotten better faster if he didn’t) but overall, spending is down in the US (mostly because of the majority of state and local governments have been sensible).

In the UK, spending is still increasing. Certain departments have had cuts, but every single month of this coalition government has increased. And you combine that fact with our higher taxes, more authoritarian government and more centralised control, well, you see what you get. A mess.

And why has America done better? The New York Times explains all, with the help of this graph: 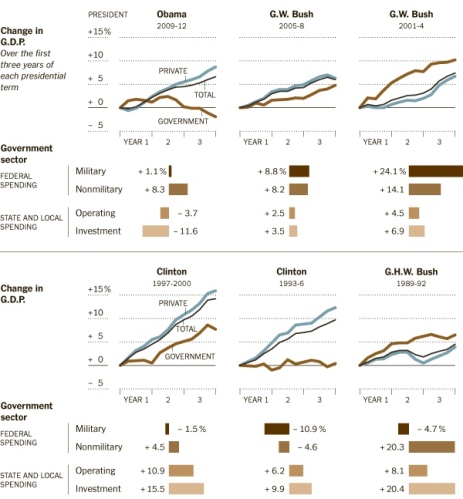 It’s the states wot’s won it, but the subsequent dip in unemployment and improving economy are going to be very useful to Obama in the forthcoming election…